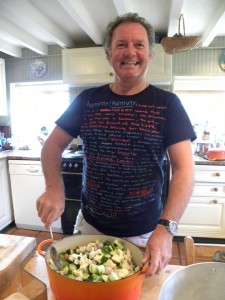 A bit about who I am and what I do then if you care about your health read on and browse the blog posts where you will find a “gold mine” of of information about how you can change your life, have a better lifestyle and maybe reduce your risks from the number 1 killer on the planet, heart disease. I have over 40 years management experience in sales and marketing, working as an Area Manager, Regional Manager, National UK Manager and main Board Director. My understanding of the importance of developing teams has always been at the forefront of my career. I am a Fellow of Ashridge Business School having studied Strategic Management for 9 months there which culminated in leading a presentation to The BBC EMIA (European and Middle East Division). I have extensive experience of managing staff and teams and the resulting in both traditional and networking business models. Some recent assignments:

In closing there are loads of people I would like to thank and I’m sorry if I miss anyone, but I don’t want to turn this into an “Oscar Speech” and bore you all at the end so in no order of merit. To everyone, friends, ex colleagues and family who have sent me words of encouragement either by phone, e-mail or get well cards a huge thank you. Ang and Don who stayed with me on the eve of my admittance. All of you who visited me in hospital, my ex Wife, Marjorie, Auntie Betty and Uncle Jimmy, Archie and Elizabeth McCallum. Alan and Auntie Doh and for also washing my “kechs” Auntie Doh. Of course the Medical Team under the leadership of Professor D J Wheatley. The Dumfries Cardio Rehab whom I have terrorised now for 18 months and for their ongoing support not just to me but all the patients. Pete and everyone at El Caballo de Espana. Ian and his family for their support then and now, also thanks to Caroline for putting up with my moaning! Alex for getting me out of hospital a day early and for 5 days after care at his home with Norma and Kerr. Jeff and his family for always being there for me in St Asaph. Sean, H and CJ (thanks for the pokemon necklace honey love Granddad Young xx) and last but not least Lorna and Simon without whom my world would not be worth a toss. I love you both from the bottom of my heart. Dad xx Finally To God! I doubt the use of forms are used but I guess I got a tick instead of a cross so I’m still here to write my Story? just as you all are reading it. God bless It’s now October 2009 and boy how my life is on the up. I live in Southern Spain and at 52 years old I have started playing my guitar again and teaching a close friend John how to play in return he’s teaching me how to play Golf. I have learned to wakeboard thanks to my son Simon and together we are both learning to Kite Surf. Not bad for someone who had almost given up on life and boy I will have much more to tell you all in the months ahead.

In 2019, July 8th to be exact I joined GalloGlas Group of which I am now a proud share holder and Director. You can find out a bit more about the group, who we are and what we do by clicking here.

So here we are in 2021 having been through the pandemic of Covid-19 and the devastating effects this has mad for all, some worse than other and not to mention the impact on economies around the world. Long-Covid has become a new buzz word with thousands who have survived the virus now suffering long term after effects and as we speed towards the 20th Anniversary of 9/11 the world appears to have turned it’s back on Afghanistan, however I’m still here telling stories and sharing the best information I can on dealing with heart disease and the impact that sage Nitric Oxide therapy using ProArgi9+ can have on the cardiovascular system.